On February 28 - March 1, 2002, the Academy of Interactive Arts and Sciences held the first D.I.C.E. Summit forwarding its mission to keep the creative wealth of the game industry flourishing. During the two-day summit at the Hard Rock Hotel and Casino in Las Vegas, interactive and game industry professionals were involved in an intimate conference environment with some of the leading figures in the development of the industry. Speakers included: PC gaming innovator American McGee, Maxis Chief Designer and SimCity creator Will Wright, Electronic Arts Chairman and CEO Larry Probst, creator of the “God Game” genre—the man behind Civilization and Railroad Tycoon - Sid Meier, and Nintendo legend and creator of the Donkey Kong and Mario series Shigeru Miyamoto.

Bringing recognition of outstanding creative accomplishment together with the exploration of new creative possibilities, the 2002 D.I.C.E. Summit was also home of the Academy’s 5th Annual International Achievement Awards, hosted by Actor and comedian Patton Oswalt, who stars as "Spence" on The King of Queens on CBS and has appeared in such feature films as Man on the Moon, Zoolander, and Magnolia. 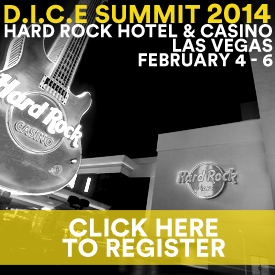