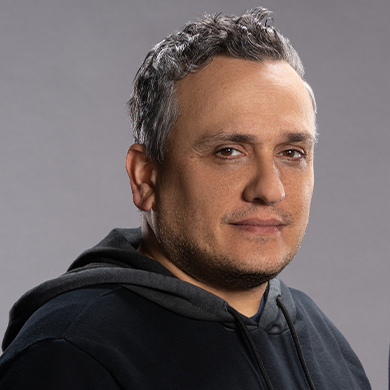 JOE RUSSO and ANTHONY RUSSO (Directors-Producers) have been absorbing classic movies since growing up in Cleveland in the 1970s. Standing  by their belief that strong teamwork brings stratospheric results, the Russo Brothers contribution to worldwide moviegoing mixes storytelling craft, filmmaking skill, and a deep understanding of how great characters can connect us all. Its a philosophy that can be felt in their debut feature, Welcome to Collinwood (2002), and underscores their work on TVs critically-acclaimed Arrested Development (for which they won an Emmy for Outstanding Directing of a Comedy Series), Community, and Happy Endings  for all of which the Russos directed the pilot episodes as well as numerous beloved signature episodes.

Through a quartet of movies within the Marvel Cinematic Universe, the Russos raised the bar for blockbuster filmmaking in artistry, scope, and box office: Captain America: The Winter Soldier (2014), Captain America: Civil War (2016), Avengers: Infinity War (2018), and Avengers: Endgame (2019), which in addition to concluding the Avengers saga racked up numerous industry records, including Biggest Single-Day Gross, Highest-Grossing Opening Weekend, and Highest-Grossing Film of All Time.

In early 2018, the Russo Brothers announces the formation of their studio, AGBO, an energetic, artist-led collective focusing on creating global content for film, television, and digital platforms. Headquartered in downtown Los Angeles, AGBO aims to nurture talent and create best-in-class family and prestige content, with the goal of working in a wide gamut of genres and bringing original ideas to the screen. Among the companys first films were 21 Bridges, starring Chadwick Boseman; Extraction, starring Chris Hemsworth, which broke records for Netflix as the biggest premiere in the platforms history with over 100 million views during its first month of release; Sundance acquisition horror thriller Relic (IFC Midnight), starring Emily Mortimer;  Middle East-set drama Mosul (Netflix), and Cherry (Apple TV+), starring Tom Holland and Ciara Bravo.

The pandemic did not slow The Russo Brothers down. During the pandemic, the brothers wrapped production on The Gray Man (starring Ryan Gosling and Chris Evans), one of Netflixs biggest productions to date, started production on arguably the most ambitious TV universe creation ever, Priyanka Chopras Citadel (Amazon), and are also shooting Extraction 2 starring Chris Hemsworth.

The Future of Media: World Building and Universe Expansion
Dive into the world of IP universe building throughout film/TV and games with renowned Directors/Producers, the Russo Brothers, the most successful architects and stewards of the cinematic universe, and Epic Games Chief Creative Officer, Donald Mustard.  Some of the best-known and most successful franchises have created universes, which feature a broader and deeper content set to extend the narrative experience.

The importance of universes to content creators has significantly increased in the new entertainment landscape where it is especially valuable to have interconnected content thats available on a cross-platform basis, including global SVOD platforms and live service games where tentpole content continues to expand and compete. When done right, universe building can transform beloved proprietary IP into something that attracts audiences from release to release and year after year--sustaining subscriptions, building brand equity, and in a sense, amortizing development and marketing costs.