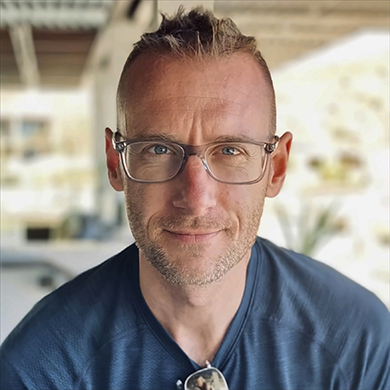 He is the co-founder of ChAIR and currently serves as Chief Creative Officer for Epic Games. In this role Donald oversees the creation and development of their portfolio of intellectual properties, providing creative vision, forging partnerships, and directing their expansion across multiple entertainment mediums.

He is best known for Fortnite: Battle Royale (2017-Present), the Infinity Blade trilogy (2010-2013), and Shadow Complex (2009) which are some of the most award winning and best selling video games of all time.

The Future of Media: World Building and Universe Expansion
Dive into the world of IP universe building throughout film/TV and games with renowned Directors/Producers, the Russo Brothers, the most successful architects and stewards of the cinematic universe, and Epic Games Chief Creative Officer, Donald Mustard.  Some of the best-known and most successful franchises have created universes, which feature a broader and deeper content set to extend the narrative experience.

The importance of universes to content creators has significantly increased in the new entertainment landscape where it is especially valuable to have interconnected content thats available on a cross-platform basis, including global SVOD platforms and live service games where tentpole content continues to expand and compete. When done right, universe building can transform beloved proprietary IP into something that attracts audiences from release to release and year after year--sustaining subscriptions, building brand equity, and in a sense, amortizing development and marketing costs.