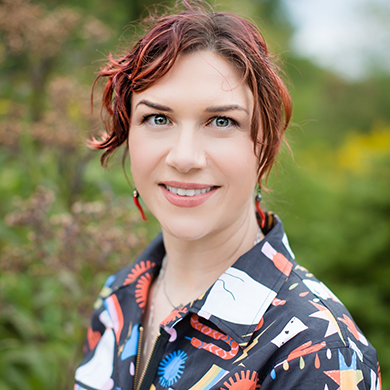 As Iron Galaxys Co-CEO, Chelsea Blasko is the adult in the room who runs the companys day-to-day operations and makes all of the magic happen behind the scenes. She maintains the well-being of its employees and the culture of the studio, overseeing IT, HR, DEI, PD, mentorship programs and more.

Chelsea was the companys 13th employee and has been instrumental in Iron Galaxys growth and high employee retention. While she was initially brought on to produce titles, she proactively took the reins on the hiring, expansion and culture development to help shape the studios elevation from 13 to 250 employees across multiple offices. Chelsea mentored many of the studios leaders by overseeing product development and teaching others the process along the way. Additionally, she created Iron Galaxys career coaching program that assigned every employee with a more senior staff member to ensure they were offered opportunities to continue to support their growth and areas of interest. Iron Galaxy now has offices in Chicago, Orlando and even a virtual Austin location.

A Notre Dame graduate, Chelsea was a high school German teacher, and managed an H&M and high-end boutique before finding her start in games at Electronic Arts in Chicago. There she was enticed by the ability to flex her creative and artistic muscles. While at EACHI, she served as the assistant to the GM and a Production Coordinator on a variety of titles and then spent a few years at Robomodo as a Producer and Project Manager.  She was finally convinced by Iron Galaxys Founder Dave Lang to share her production expertise at Iron Galaxy and quickly took over the entire companys production department and internal operations before becoming the co-CEO. Iron Galaxy strives to be a welcoming and diverse place to work, and Chelsea is key to making sure that goal is realized.

Fostering an Inclusive Workplace
How do gaming companies foster a safe, welcoming, and inclusive work environment where employees at all levels respect one-another regardless of race, gender, age, ability, identity, orientation, or background? In this roundtable, we will share our experiences in building policies and processes that help ensure that safety, equity, and respect remains at the forefront of our culture.