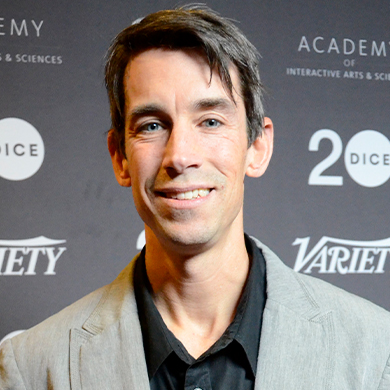 Ted Price is CEO and founder of Insomniac Games, Inc. - an independent game developer with offices in Burbank, CA and Durham, NC.

The company is currently working on an original Spider-Man for the PlayStation 4 and on new content for The Unspoken.

Insomniacs console games have sold over 44 million units worldwide since the companys inception in 1994. Insomniac has also won numerous local, state and national workplace awards for its unique culture.

Price's responsibilities at Insomniac include directing the company's strategic planning and day-to-day business as well as contributing to its projects. Price is also the vice chairman of the Academy of Interactive Arts & Sciences. He graduated from Princeton University where he earned a B.A. in English.

Bryan Intihar, Creative Director at Insomniac Games for Marvels Spider-Man will be joining the AIAS Gamemakers Notebook podcast host Ted Price for a special live taping on the D.I.C.E. Summit stage. This podcast interview will feature an in-depth, one-on-one conversation on the business and craft of developing one of the biggest games from 2018.