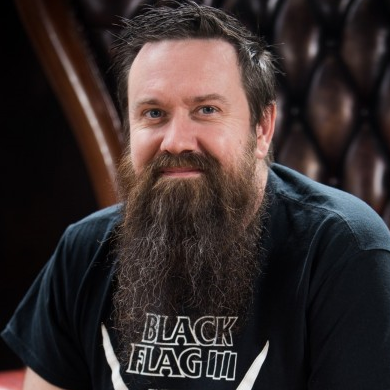 In the hands of Greg Broadmore, imagination becomes reality. As Game Director at five-time Academy Award®-winning Weta Workshop and founding member of the companys game studio, Gregs artistic vision has been brought to life in Dr. Grordborts Invaders, the flagship game for Magic Leap One.

Launching at Magic Leaps first conference, LEAP, in 2018, this pioneering spatial computing experience brings a colourful cast of characters into your home and allows you to fend off an invasion of human-sized robots who adapt to the unique geometry of your space. Created as a showcase for the new platform, Dr. Grordborts Invaders is a compelling example of Magic Leap Ones technical capabilities.

Greg is best-known for creating of the world of Dr. Grordbortsa retro-sci-fi universe filled with ornate rocket ships, inter-planetary colonialism and elaborate rayguns which he created in 2007. He designed and released a line of high-end collectible rayguns and other merchandise and, in 2009, launched Dr Grordbort's Exceptional Exhibition, which has now toured Hong Kong, China, Germany, France, Switzerland and New Zealand.

Since 2002, Greg has worked at Weta Workshop as a designer, artist, sculptor and writer. He was the lead concept designer on District 9 and a concept designer and sculptor on King Kong, The Chronicles of Narnia: The Lion, The Witch and the Wardrobe and The Adventures of Tintin.

Greg has also written and illustrated many books, including four based in the world of Dr. Grordborts: Dr. Grordborts Contrapulatonic Dingus Directory (2008), VICTORY -- Scientific Adventure Violence for Young Men and Literate Women (2009), TRIUMPH - Unnecessarily Violent Tales of Science Adventure for the Simple and Unfortunate (2012) and ONSLAUGHT.

Science Fiction off the Screen, and into your Living Room

Delve into the origin story of Weta Workshop and Magic Leap joining forces on the frontier of spatial computing. Greg Broadmore describes the creative and design challenges of making peoples real homes the frontlines of a comical science-fiction invasion, and what it was like to be a first developer, and working in tandem with Magic Leap to help define an entirely new medium.